Once the Book is Written...

Every time one of my friends asks how the book is going and I say I'm closing in on a complete draft, they inevitably say, "Oooh! When will I be able to buy it?" (sigh) And I have to explain to them that it doesn't work that way. But for some reason, their eyes glazed over after I explain the differences in macro and micro edits. How long it can take to find an agent, writing loglines, queries, synopses, etc. All on the top of producing a complete and polished final (if there is such a thing) draft...And so it goes. I'm still at the tiniest of first steps--I'm nearly done with a rough draft. 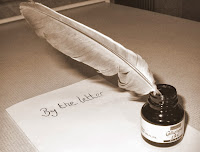 There are other writers who have explained that so well and one of them is my fellow WFWA member, Kerry Ann Morgan. Check out her latest blog post--I've Entered the Fight...er...Submission Club. She tells the truth with such comedic flair!

Also check out this announcement. The Bookshelf Muse has moved to Writers Helping Writers and celebrating with a great give away.

FRIENDLY FIRE Update:
Part 1--Dreams is now in complete rough draft stage. Currently it's being read by some fabulous writers and non-writers to see if it makes sense to anyone else but me. ;-) John has read 3 chapters and only stumbled on one sentence. Guess what? He was right, it needed moved. (Have I reminded you lately that I love that man?)

And I have a potential logline or one sentence that sets up the story's beginning.
When a retired, childless widow meets a troubled foster child and steps into the breach, she realizes abuse is rampant in her home town—and she’s at ground zero.
Posted by Zan Marie at 12:30:00 AM