Review: DON'T GET MAD, GET EVEN

What choices do you have when you are abused, cheated on and left with a trail of broken promises? Don’t Get Mad…Get Even. Take an inside look at Jamaican culture and lifestyle through a collection of award-winning stories. You will laugh, cry and commiserate with a compelling cast of characters, who conquer their challenges in unique ways.


~~J. L. Campbell's award-winning story collection not only introduces readers to a series of characters who have difficult roads to travel, but also introduces many aspects of Jamaican culture. While you might not agree with the actions of the point of view characters, the well-written stories tell the origins of their motives in vivid images.

J.L. Campbell lives in Jamaica and is always on the hunt for story-making material. She writes romantic suspense, women's fiction and young adult novels.

J. L. blogs at The Character Depot. Her books are available at Smashwords.
Check out Amazon for info on her other books: Dissolution and Contraband
Posted by Zan Marie at 4:40:00 PM 7 comments:

Email ThisBlogThis!Share to TwitterShare to FacebookShare to Pinterest
Labels: Don't Get Mad, Get Even, J. L. Campbell, review

He knew it was time--
Time to go beyond
When the maggots flew
And his miasma dissipated.
His body sank into
A lacuna, a missing space,
Where only his bones
Would remain to oscitate.
He marveled at Life and Death’s
Synchronicity
As he moved on to begin anew
With discovery of
His new destination--
A mirror of his past.


Racheal has given us a big challenge this time:
The Challenge is:


Write a blog post in 200 words or less, excluding the title. It can be in any format, whether flash fiction, non-fiction, humorous blog musings, poem, etc. The blog post should:

If you want to give yourself an added challenge (optional and included in the word count), make reference to a mirror in your post.

For those who want an even greater challenge (optional), make your post 200 words EXACTLY!

Once you’ve posted your Challenge post on your blog, pop back here and link directly to it in the Linky List below (please make sure you include the direct link to your post, not just the link to your blog!).

I've again set up the Linky List to let you "Like" entries, so make sure you come back here and vote. Winners this Challenge will be determined solely on the basis of your votes. This is an honor system, so please don't take advantage of this process either on your own or another's behalf. "Like" voting will close on Friday, October 14th.
Posted by Zan Marie at 3:55:00 PM 76 comments: 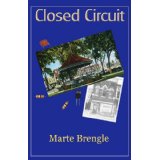 One of the best things about getting to know writers at the Books and Writers Forum is that you know their books will be wonderful reads. Marte Brengle's Closed Circuit is a perfect example.

Set in Lyric, Iowa, Closed Circuit is  full of small town charms and heartaches with its kind-hearted people and its scoundrels. The intricate plot is full of mystery and life and will keep you turning the pages. You'll love the fully realized characters and will cheer them on as they navigate the changes in their lives.

Here's the blurb from Amazon:
Ruth Peyton is sure she has everything she needs. Her own business, a mentor, a great circle of friends, and Lyric, her lifelong home town. And then, one hot summer day, everything changes. Who are these strangers who have come to Lyric to buy Ruth's building as the first step in their mysterious plan? Will they control Lyric's future-and Ruth's? And now someone from her past is determined to draw Ruth back into a painful relationship she thought she'd put behind her. Can she make peace with the past in time to save her home town from the radical alterations that lie ahead? Or is there nothing left for her but to leave Lyric for good?

Be sure to get this book! Marte Brengle's second novel, Dutchman's Puzzle, is also available now.
Posted by Zan Marie at 5:38:00 PM 5 comments:

Emotional Stages of Writing a Novel

~~If you haven't figured it out by now, I'll let you in on a little secret...
I'm bogged down at the moment. Too much to do and too little energy make me very bad at connecting with all the lovely writers in the Campaign. I really planned to get to at all my groups at least once a week. I'm not doing so well at that. So, I'll give you a lovely little clip to watch--The Emotional Stages of Writing a Novel. Enjoy! ; )

~~The first Platform Challenge is here! And it's a challenge and a half. The instrustions are:

Write a short story/flash fiction story in 200 words or less, excluding the title. It can be in any format, including a poem. Begin the story with the words, “The door swung open” These four words will be included in the word count.

If you want to give yourself an added challenge (optional), use the same beginning words and end with the words: "the door swung shut." (also included in the word count)

For those who want an even greater challenge, make your story 200 words EXACTLY!
Check out Rach Writes for links to other Campaigners' stories.

Decisions
The door swung open.
Lights. Sirens. Screams.
“Oh My God!”
“Is he dead?”
“He just slammed into that tree!”
A man’s face forced him to focus. “Buddy, we’ll get you out. Hang on.”
Whump. Whump. Whump.
“LifeFlight’s here.”
“Good. Okay, buddy, we’ll get you out of here. Hang on.”
Then everything faded out.
#
“Paul. Paul. Do you hear me?”
Beep, beep, beep.
Pressure squeezed his arm and then released with a whoosh.
His mouth was dry, clotted. “Uh?”
A tall woman in green scrubs leaned over him and smiled. “Hi, Paul. Good to see you awake. It’s going to take a while, but you’ll get better. You’ll see.”
#
Weeks. It took weeks, but he finally pieced it together. He’d been drinking, but he wasn’t more than buzzed when Harm had texted him about the card game. Yes. A card game. In a flash, he’d decided to go. Then hit a tree.
Now it was all over. He’d hit a plateau in his healing, and he’d be stuck with that decision for the rest of his life. Traumatic Brain Injury.
Any decision he’d make in the future got up and walked out of the door.
The door swung shut.