Since summer ends today, I thought I'd say farewell with a few pics of my glorious summer flowers. Enjoy! ; ) 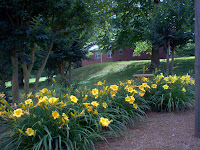 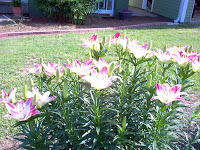 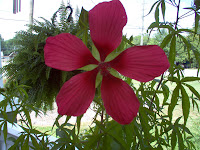 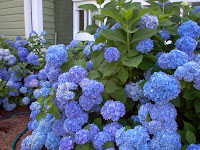 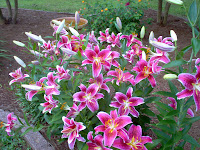 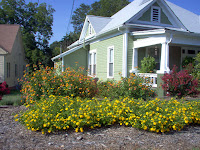 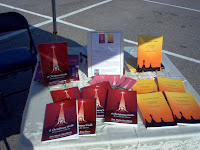 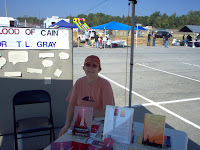 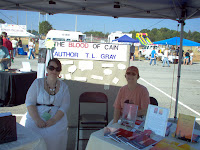 It was HOT! When you sit in the middle of a parking lot, surrounded by asphalt, you expect the heat, but the reality is way beyond expectations. John said it was only 89 degrees, but it might as well have been 95. There was a breeze and that helped. T. L. Gray and I had a good day selling our books and making contacts with various people. Check you T. L.'s website http://www.thebloodofcain.com/ Her book is wonderful! Be sure to read all the reviews. I recommend it highly if you like good stories that are well told.

We'll both be at MeccaFest, October 9-10, at the Cultural Arts Center in Carrollton. The Carrollton Creative Writers Club will not only be selling our books, but also will be presenting "Local Voices". We will read excerpts, poems, and stories from our works from 10:30 till 3 on Saturday and 11:30 till 4 on Sunday in the Mabry Auditorium. I'll be reading three excerpts form Mother's Day, my novel in progress. At least the readings will be inside. Come and see us at the tents or enjoy the creativity of the members. We'd love to see you all.

Flowers for Our Anniversary 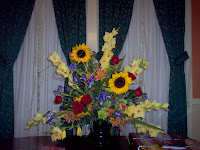 Aren't they beautiful! Imagine our surprise and delight on Sunday morning to find that one of our friends--Barbara Billert--had bought the flowers for the Sanctuary in honor of our anniversary. We had no clue until someone pointed out the notice in the bulletin. Our dining room table is five feet wide and the flowers are over three and a half feet wide. They made an amazing centerpiece. And if you wondered what was piled up around the flowers, it's stacks of A Christmas Walk. Where else did you think I'd put them? ; )
Posted by Zan Marie at 9:29:00 AM 4 comments: 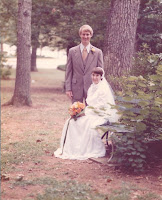 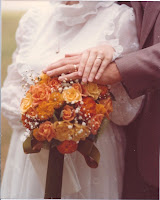 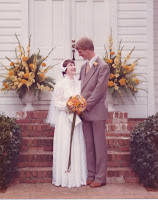 No, I'm not kidding. Thirty-three years ago on September 4, John and I got married. We were twenty-one years old and ready to take on the world. Since we met at what was then West Georgia College in a Political Science class titled "Foreign Relations", you might not be surprised that we get married at Kennedy Chapel on the Front Campus. At eight in the morning. Really. We knew how busy Maple Street was during the day and wanted the ceremony to be outside on the steps amid the trees and flowers of Front Campus. So, early in the morning on Labor Day Sunday, we said our "I do's". Pleasantly cool air greeted the twenty-three guests. I had made my dress and John's shirt and tie. 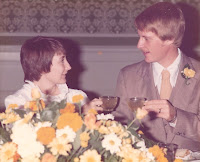 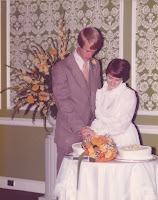 After the ceremony, we ate brunch in place of a reception. So is it any wonder, that we celebrated our anniversary with a buffet breakfast this morning? What could be better?
We drove to Savannah for our honeymoon and loved every minute of it. In fact, on our honeymoon, we found that we have a very special freight line. Really. One day during our week in Savannah, we were out on Tybee Island and saw a containerized freight ship coming in the Savannah River channel. It was the Arnold-Mersk. Later stopping at Pulaski National Battlefield, we saw the same ship coming up the river. Hurrying into town, we found the ship sailing slowly past River Street. So now, when we see railroad car after railroad car of Mersk containers, we turn to each other and grin. Some couples have a favorite song. We have a freight line. ; )
Posted by Zan Marie at 5:03:00 PM 13 comments: