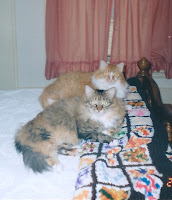 ~~Darkness became an only cat again when Snow died. She took it in stride as with everything. We never saw her hunting for him, but then, she had watched him like a hawk as he felt his way about the house in his last days. She was about fifteen years old by then and we really didn't expect to get more cats until she had purred her last. In fact, she was starting to sleep more and more by the time she was seventeen. Cataracts, reduced hearing, and arthritis were slowing her down to a crawl. We began to talk about what we would do when she was gone from our lives. We thought we might hunt for siblings this time. A yellow tabby and a calico were on our wish list.
~~Then it all changed. Living by a church and across the street from another seemed to make us a animal rescue center. For years, we noticed that people thought that someone who went to church would have pity on a poor abandoned animal. Many dogs and cats had been dropped off in the neighborhood. We weren't in the position to care for them at all. So they either wandered off or found the wildlife to their liking. The woods in the backyard were full of squirrels, birds, rabbits, and chipmunks. It seemed that many a cat made a good living on the edges of our yard.
~~One day in the fall of 1997, we found a young female cat hanging at our door. She was striped like a tabby, but she was not all yellow or gray striped. Her legs would be both in the most interesting fashion. The vet would describe her as a calico tabby. At John's parents' house next door, there was a young yellow tabby male. They were obviously siblings with the same light green eyes and markings. We couldn't resist them, but the male had a lump on his abdomen. We were hooked and decided to keep them outside to spare Darkness the upheaval kittens would cause her very sedate life.
~~Named Sunshine and Meow, the twins had to come in when Sunshine's lump turned out to be an umbilical hernia and he needed surgery. Trying to keep the three separate was impossible. The cats decided that they were going to investigate each other and that was that. We soon realized that the kittens were just what Darkness needed. They would trot just fast enough to keep their tails in her eyesight. She would run as fast as she could, but didn't catch them. That's when we noticed that she was feeling much better. Darkness lived another four years thanks to Sunshine and Meow. They were Maine coon cats while Darkness was a small domestic short hair. She never weighed more than ten pounds in her life. The kittens would top 18 and 22 at one time and yet, Darkness was the undisputed queen of our home. Regal until the end.
~~Sadly, Darkness developed severe dementia at 21. She ceased knowing who we were and began to bite. When she latched onto my hand and refused to let go for minutes at a time, we knew she was ready. She had ceased to purr the last month until we took her in to the vet the last time. Then we were rewarded with the loving little girl we had lived with for so long. In the fall of 2001, Darkness passed into her reward. We have never forgotten her. She'll always be the queen.
Posted by Zan Marie at 3:26:00 PM 2 comments: 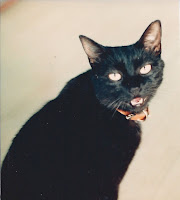 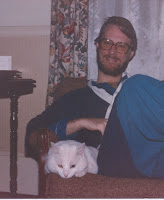 ~~Darkness remained an only cat until she was about two years old when a small white kitten turned up at out house while we were added the garage in 1982. He was a plush, sweet little boy and we had no clue where he came from. But that didn't deter us from feeding him. We quickly decided on a name. Surely it was Daylight to contrast with the Dark girl who already called us family. Until he disappeared...We hunted, but didn't find him. The church next door had been full of kids for Vacation Bible School that week and we thought someone recognized him or picked him up. Sad to say, but the Daylight had gone from our lives.
~~Until...two years later, a sleek white tom came calling at our door. Neighbors nearby had moved and we couldn't find any owners for the cat, so we took him in. The vet said he was about two years old and we had to wonder--had Daylight returned? Not being sure, we named the tom Snow. As you can see from the photo, Snow had a preference of laps--John's. (By the way, this is the only time I convinced John to grow a beard. I think he looks dashing, but the itching thing was red and his hair was blond, so bye, bye beard.) For about ten years, I had fun telling my new students that I had two cats--white and black. I always said, "The white one is named Darkness and the black one is named Snow." The two seconds it took for the information to click was priceless and set a tone of ease for the new class. Of course, some of the kids never believed me that both cats had learned to blow kisses. Snow was not less a champ at that than his sister. ; )
~~Darkness and Snow were our two kitties for about ten years until Snow had a stroke and went blind. He was miserable and wouldn't get out from under the bed. Sadly, we had to let him go. Darkness went back to being an only cat. I'm not sure it mattered to her. After all, she got the choice of laps with no competition.
Posted by Zan Marie at 8:15:00 AM 2 comments: 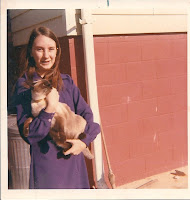 ~~Well, technically not lost. Only not available to upload. Here are three of the photos I've mentioned in other posts. The first one isn't the best one of toddler me and Snowball, but it is the one I found. The best photo shows me center frame with Grandmother's arm holding me back while I'm reaching for all I'm worth for Snowball's tail. ; ) The middle photo is about a year later and, as you can see, I loved Snowball's kisses. The third photo is much younger. I'm probably about 15 and I'm holding Etcetera the Siamese. My how young I look!
~~I bet you're wondering how I scanned these in since my scanner and computer seem not to communicate. What I did was use my Corel Paint Shop program. I was using it for some other task the other day when I noticed the drop down menu included scanner. On the off chance that it would work, I tried it. And lo and behold! It did. So, now I'll be able to illustrate the rest of the Darkness posts correctly. I'll be back later with "Darkness and Daylight".
Posted by Zan Marie at 1:17:00 PM 2 comments: