Anniversaries (and an update on FRIENDLY FIRE)

Anniversaries are lovely things when they mark happy occasions and evoke fun memories. In fact, our thirty-sixth anniversary is this week and we'll be gone for a couple of days.

I'm working hard to make another anniversary a happy one, too. In March 2008 I woke from a nap with the first scene of FRIENDLY FIRE in my head. By the end of the day, I knew the basic story outline. Mind you, the story has undergone some major revisions and thematic changes, but the story is still there. Laura Grace and Samantha have lived in my mind for five and a half years. I'm working hard to have a complete draft by the end of this year, but if I don't manage it, I do hope to be able to say the rough draft is done by the end of March 2014. That would be a fitting way to celebrate the sixth anniversary of my story, don't you think?

So, keep your fingers crossed, throw a few good thoughts and supportive prayers my way. Maybe you'll be able to celebrate that anniversary with me, too. ; )

Update: I've finished the reread corrections--all bazillion of them. ; ) I'm going to pull all the individual scenes that got noted to need additions, the scenes that are only stubs, and the scenes that exist only as jot lists for a concentrated session of "fill-in-the-blank". Keep your good thoughts coming my way and cross your fingers. ; )

This is for when you are just tied up in knots and know you don't know enough to do the job right. Ira Glass has it all explained. ; ) 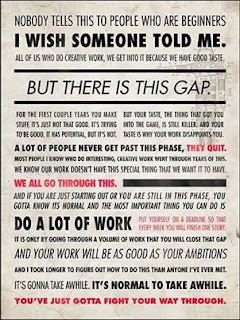