You HAVE to Read This Book! 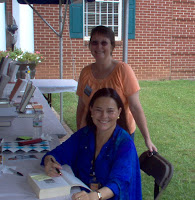 ~~I mean it. With over three and a half million words in print and seventeen million copies sold (and growing), you can't go wrong if Diana Gabaldon's name is on the cover. Diana's latest book, An Echo in the Bone, debuted at number two on the New York Times bestseller list. Echo went on sale September 22 and it has been selling fast ever since. And there's good reason for the number of books sold. Full of historical fiction and military history, time-travel, wonderful, realistic characters, intricate plots, accurate research used in creative ways, and layered, beautiful detail that draws the reader in, Diana Gabaldon shows what great writing can be. As the winner of the Quill and Corinne International prizes for her last book, A Breath of Snow and Ashes, many know how good a read her books are.
~~The main Outlander series introduces readers to the amazing lives of Jamie Frazer, a Scottish Highlander, and his wife, Claire Randall, a nurse from WWII. Yes, it's possible. ; ) The order of the main series is:
*Outlander
*Dragonfly in Amber
*Voyager
*Drums of Autumn
*The Fiery Cross
*A Breath of Snow and Ashes
* An Echo in the Bone
In addition, Diana has written an offshoot series about the interesting character, Lord John Grey. Lord John is an important character in the main series and to understand his importance, the reader should read his series as well. The Lord John books are:
*Lord John and the Hand of Devils
*Lord John and the Private Matter
* Lord John and the Brotherhood of the Blade
The first is an anthology of three novellas. The correct chronological order of the stories are "The Hellfire Club", then The Private Matter, "Lord John and the Succubus", Brotherhood of the Blade, and "Lord John and the Haunted Soldier." Diana is working on a new Lord John book, Lord John and the Scottish Prisoner.
~~The most wonderful thing about Diana Gabaldon is her generosity. She is an important part of the CompuServe Books and Writers Forum where she offers advice and craft lessons for all writers. I highly recommend joining the forum to learn more about writing from Diana and the many writers who regularly post there.
~~Another example of Diana's generosity is the time she spends with her fans at book signings and festivals. I had the great pleasure to hear her and have some books signed at this year's Decatur Book Festival on September 5. After sharing insight into Echo and her upcoming graphic novel set in the Outlander storyline, she signed books for the hundreds of fans. Then went to another event and did it all again. The photo is of Diana signing books for me at Decatur.
Posted by Zan Marie at 9:12:00 AM No comments: