It's Getting Better. I Promise!

~~My mother-in-law, Helen, had hip replacement surgery on Tuesday. It's been a long time since she fell in August, but finally we are moving in the right direction. The first problem was the fall, followed by the screws that were to hold the fracture in place didn't, and finally a new fracture appeared. It's a new fracture or one that wasn't found to begin with. We'll never really know.
~~What we do know is that the new doctor from Emory Orthopedics has replaced the bone that was inflamed around the screws and the fractured ball that was also inflamed. She stood up for the first time in over two months the day after surgery. It's a relief. She can now get better and have a life that is easier on her and her sons.
~~Keep us in your prayers.
Posted by Zan Marie at 9:18:00 AM No comments:

Snow! And It's Still Here 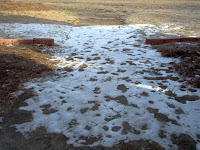 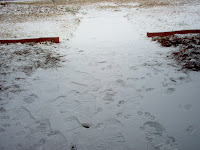 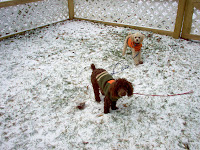 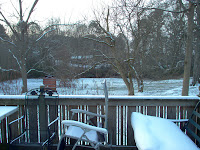 ~~Okay. I know the usual comments. "You southerners don't know how to drive on snow." Heard it a thousand times. No, wait. It hasn't snowed a thousand times in my whole life. ; ) All I have to say is, we never have just snow. It always has a layer of ice with it. This time, even some of the northerners I know agree, my area of Georgia got whacked. A twenty-nine car pile-up that was covered on national news is proof. No one is saying we were alarmist this time.
~~I thought I'd share a few photos of the snow. Of course, the boys are in one. ; ) The front walk with its people and puppy tracks is here twice--a week apart. That's right, we still have snow on the ground. At least the temperatures have rebounded into the average range instead of the highs being below the average lows like it was for nearly two weeks. So sit back and enjoy a view from your warm computer.
Posted by Zan Marie at 1:38:00 PM No comments:

What's In A Name?

~~What's in a name? I should know. I have to be the world's record holder for an interesting name and multiple nicknames. For the record, my first name--Zan--was my father's fifth grade girlfriend's name. I'm not joking. ; ) He always said she sat by him for about five weeks then moved. The teacher called her Zan and he didn't remember if her name was short for Suzanne or Alexandra. He just liked the name. When my sister was born, Mother named her for a character in a book and Daddy added the middle name. She's Thea Sue. Then I showed up. Daddy named me Zan and Mother added Marie. They were going to call me both names, but my sister, all of three and a half couldn't pronounce it and said, "Jamboree." Mother was worried about that and quickly taught Thea to say Zan by itself. And my first nickname was created. I've since gone back to using both names. Cuts down mail addressed to Mr. Zan.
~~Over the years I have seemed to collect new nicknames often. Things like Messeroo which never made sense to me. I wasn't a messy child. School nicknames included Banana-Nose, Zan-i-mo-mechan-i-mo, Zanzibar and Zanabanana. None of these make any sense either, but I guess you can chalk it up to the source of many of them--my fellow classmates. For the record, the best nickname is still my first. I like Jamboree. ; )
~~Besides being asked if my name is short for another name and where did it come from, I guess asking "What does Zan mean?" has to be a national sport. ; ) It's taken me years to figure out the answer. I've looked in every baby name book I've come across for years. Some mention that Zana is the Russian form of Jane and others might mention that it is a short form of Suzanne or Alexandra, but none of that really satisfied me. After years of searching, I finally found the real answer. In Bruce Lansky's 100,000+ Baby Names, I finally found it. Zan is Italian for clown. When you add Marie, the French form of Mary, you add bitter from Mary's Hebrew origins. So there you have it, the real meaning of my name. I'm a bitter clown. Well, that's about half right--I can be a clown! ; )
Posted by Zan Marie at 2:39:00 PM 3 comments: