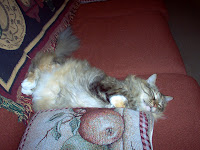 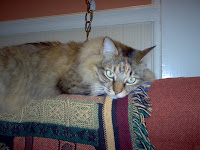 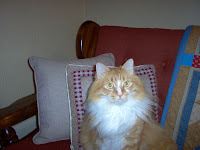 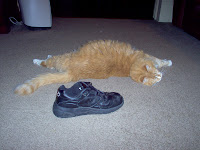 ~~I know what you are saying to yourself right about now--Wait a minute, doesn't Zan Marie have poodles? The answer to that is, yes. But before Casey and Max, I proudly belonged to seven cats. The two in the photos above are the last two, Meow and Sunshine. When I had a problem finding my photo of the boys in their new harnesses, I realized that the memory card wasn't seated fully and the photos saved to the camera's memory instead. Once I downloaded it, I found wonderful photos of the cats. I didn't have a digital photo of Meow at all. At least I didn't think I did. ; )
~~This treasure trove has allowed me to show you the kitties. These two were throw aways that someone left on our doorstep. They were Maine Coon cats and weighed between 13 and 22 pounds during their adult life. Sadly, we lost Meow at eight and Sunshine at 13, both to cancer. It was during Sunshine's last days that John said he wanted puppies and the rest of that story is history.
~~As you can see, Brother Sunshine (Shiney, Shine-Shine) was a gorgeous yellow tabby and huge. The shoe he posed by is one of John's size elevens. The shoe is exactly a foot long. Sister Meow (Yowy, Yow-Yow) was a beautiful calico tabby. She had stripes of both gray tabby and yellow tabby that met up and changed color down her legs--one side gray and other yellow. I truly think she is the most beautiful cat I've ever known.
~~I'll have to tell you about all my cats as the next few posts continue. Unfortunately, my scanner doesn't "communicate with this computer" and I'll not be able to include photos. That is unless you want to come and fix this glitch for me. ; )
Posted by Zan Marie at 3:07:00 PM